I havent been here for a while

I havent been here for a while. Due to life commitments,
im trying to be more consistent with my music.
i would love some feedback on this track if you have time
https://soundcloud.com/user-868013455-804001334/scope-original-mix-home-master
Thanks
Fred

I like the sounds choice in this one, they are all fitting quite well together to give that dark techno feel to the track, so that’s a good point for me because picking up the right sounds from the start makes the production process much easier and leads to better & faster results.

It’s been a while since my last feedback, but from memory I can also tell that there’s noticeable improvements in both production and arrangement. Still, this one is very minimal and there’s room for adding other elements, not especially core elements, but you’ve got place to enhance the track & arrangement by adding more atmosphere layers. During some parts like the transition & drop i.e, it’s sounding a bit empty and thus it’s not creating the tension you could expect at those peek time of the track. Adding those extra ambience layers can really help to keep the listener interest.

Following on the arrangement, it’s a rather long track for the song structure itself. Again, it’s hard to keep listener’s interest with very similar parts and no variations during more than 8 minutes. You don’t need to make your intro & outro parts that long, even if you’d like to keep the track Dj friendly for mixing, you can drastically reduce those parts length.

While it can be good to bring gradually the different elements of the track, you should shorten this kick & drums only intro and bring other elements before. Nothing is happening but the drums until 1:38, even if you’d like to make it old school DJ friendly, those intros never exceed 1 minute and most of the time there will be other elements playing along with the drums once the beat is set on. Same goes for the outro that can help the DJ to mix in the next track, it doesn’t need to be that long. Add to this those 15 seconds of blank at the beginning of the track, it’s good to have a safety blank area at the beginning & end of your track inside your DAW but once rendered, you should get rid of them if you plan to upload the track, not a big deal when you’re experiencing for yourself, but it won’t do for other purposes.

So on the overall track structure, shorten the parts, bring more ambience elements and add some variations, you can have a different part playing after the break i.e, so you’ll end up with something like “Intro->Part A->1st Drop->Break->2nd Drop->Part B-Outro”

For the rest it’s more about levels and mixing. You really cranked up this one way too much

Don’t bother with trying to “master” ( or at least Mix ) your tracks at this stage. Trying to sound as loud and to be competitive with other commercial tracks is another step, pushing levels and limiters won’t help and starting to mix at rather high levels won’t benefit the track in the end. Also keep in mind that SoundCloud now normalizes track at -14LUFS, and it works in both ways : so if your track isn’t loud enough their limiter will push the track but if it’s too loud, it will put it down and some clipping will occur if your peak levels are too high and your track will then suffer from encoding distortion. That’s exactly what’s happening here, the very 1st time I listened to the track I was quite happy with a nice sounding kick & low end, but I rely on Sonarworks Reference and system wide applies a safety level reduction on the output to protect your monitors and headphones, as soon as I bypassed this limitation, the kick was sounding distorted & clipped.

It’s recommended to mix between -18 LUFS and -14 LUFS for SoundCloud, you can even go above this figure, but the important bit is to keep control of your true peaks and never have them reaching 0 dBFS. Usually, keeping your true peaks around -4 dBFS is enough. Once you have this under control, SoundCloud recommends to lower your master output by -1 dB if your mix stands around -14 LUFS and by -2 dB id you’re mixing louder than this.

On the pic below, you can see that your peaks levels are above 0, thus the clipping & distortion happening during playback. If you have a sub-woofer when listening, it might be able to reproduce the sound and you won’t notice it unless you push the playback levels, but on a classic setup or headphones, it won’t work. 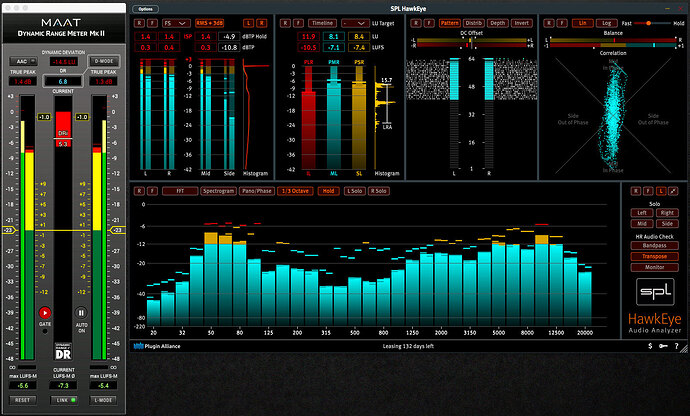 This pic is also showing something interesting about the overall mix balance and energy across the frequencies spectrum and it reflects quite well what I’ve been hearing during my listening. So as you can see, the low end is definitely to high, and that’s because of the level of the kick, there’s no really unwanted sub-frequencies showing up, so I believe you’ve high-passed some low-end on your kick already, which is a good thing, but it’s just too hot in terms of level & peaks, same goes for all drums elements, mute all your tracks, start back with the kick and set a level at around -12 or even -14 dBFS on your channel, then check back your peaks, the free Voxengo “SPAN” plug-in will help with levels & frequencies ( I probably already mentioned this one ) and there’s also a LUFS monitoring mode available, it’s worth taking the time to get the best out of this free plug-in.

Next is the mid-range with rather low levels, and when listening, the arpeggio synth part and some atmosphere elements are really sitting behind the drums & Fx sounds, those synths should be louder.

Finally, in the higher frequencies range, there’s a lot going on and too much levels and those are your percussion sounds, rides, hats & shakers. Those are too loud and it’s arming the track in 2 ways : first of all, since it’s not hard or heavy techno style, elements like rides, hats, shakers…etc usually don’t jump in your face, they are more subtle and aim at providing a sense of groove and rhythm to the listener, but not a very pronounced core element. The second reason is that those type of sounds usually have a lot of resonant frequencies. If you put an EQ on the master and use a very pronounced shelf to lift up those frequencies, you’ll hear those resonances. You have to take care of this and tame those levels & frequencies, because it will make the mix sounding harsh and if those frequencies are going through a limiter or a compressor at high levels, they’ll arm the mixing stage as well. So try to keep those frequencies & levels under control, tame resonances with EQ per channel as well.

Final thoughts about those percussion elements would be to try to introduce movement and variations. The pattern are very linear now and using equal velocity, playing with velocity or using slightly different samples would help to have something sounding more organic. That said, it’s not always working in Techno, but at least creating movement using panning will definitely create interest. Can’t remember what DAW you’re using ( if I ever asked

) but Ableton Live has got the “Auto-Pan” audio effect device, a very good but expensive plug-in is Soundtoys “PanMan” but you have also a very good free plug-in from Cableguys called “PanCake2”, definitely check this one out.

So here you go, hope that can help, but overall I think you’ve improved your skills ( now the real question is "what do you think about it yourself ? Because it’s easy to be self-doubting and less confident when trying to judge your own progress ), good choice of sounds & texture blending well for that genre, more cohesive song structure ( and yes there’s room for improvement in this area, but don’t be surprised, song structure & arrangement is a very tricky one and it takes time, best advice is to take reference tracks and copy the arrangement, it’s not cheating, just getting some good guidelines & habits until it becomes more easy ), definitely pay more attention to volume and balancing your mix, if you take the habit to mix at low levels, not only it will avoid the “louder sounds better” effect but it will also train your ears more and give you plenty of headroom when reaching the mixing/mastering stage.

Wow thank you so much
I will read this a few times and give a more detailed reply.

WoW tekalight… Thank you so much for this feedback I really appreciate it. I think sonic academy is the only place outside of Keith Mills FMM. where I can get detailed feedback on tracks. I’ve come to realise that feedback is one the most important parts of getting better at this production game.
To be honest I lost focus on this track and just wanted to finish it. I think I maybe rushed it. I maybe should of let it rest for a couple of days and went back to it, Im guilty of being inpatient, which isn’t a good thing. Iv been listening to Kieth Mills podcasts which are a game changer in terms of mind set.
I will take onboard the points you have brought up, in terms of mixing, its something I need to work on like most things. But for now consistently is the key for me.
I thank you again for the valuable feedback. its people like you that make this community so worthwhile
Fred.

Thanks for the kinds words and glad to read that you found the feedback useful to you. It’s not something always easy to provide TBH, but I’m also a bed room producer, struggling with my own music production as well, so I try to avoid to compare anyone’s track to standards or commercial releases and focus more on things that make sense, stuffs I know from my own experience and mistakes, as well as important areas to pay attention to.

There’s no secret in the end, it takes a lot of time, practice and passion before starting to feel happy with the results. There’s a lot of knowledge to grab, invaluable resources and tutors to learn from on S.A website, at some point getting this piece of advice for something specific and another one for something else will all make sense, even if it’s confusing at first. It’s just a big puzzle where you manage to get new parts each time you learn something without really having a clue of the final picture, which can sometime feel doubting & discouraging but it will be rewarding in the end, that’s when passion comes into play : if you really enjoy producing music and are able to put some time & work into it, then it should only go upward with results & satisfaction, but of course it doesn’t happen overnight and that’s something to keep in mind.

And yes breaks and hours spent in the studio are very important, too much listening the same track or even area of a track leads to ears & mental fatigue and a serious lost of perspective & objectivity on any mix. After a while, if you feel like an idea or track is going nowhere, then simply trash it to the bin or at least store it into an “ideas” folder and don’t be afraid to start something else : again practicing a lot is key point, you’ll probably learn one or two tricks each time, whatever the result was, and once you acknowledge that learning it will be there for the next project.

Cheers & 'till next time then