Hi, I think there was another thread outside the beta area about a similar issue with Studio One, but I tried the latest available beta (2.0.993b) and am running into the same issue.

Moving the VST3 version of the plug-in out of the /Library/Audio//Plug-Ins/VST3 folder allows the old songs to load/play correctly, but I haven’t figured out a way to upgrade without manually copying/replicating all the settings for each track.

There should be no space in the VST3 ANA 2 plugin name ( talking about the installed plug-in file name here, not the name that might be shown inside Studio One ), so it could be something wrong with your installation and manually replacing plugins.

That should be the normal behavior.

Check what plug-ins versions you’ve got installed on your Mac :

Locate both plug-ins, right click on each one and select “Show Package Contents” → Then open the “Contents” folder → Select the .plist file and click on your space bar to view it : All plugins should indicate v2.0.993 for the “ShortVersion” string. 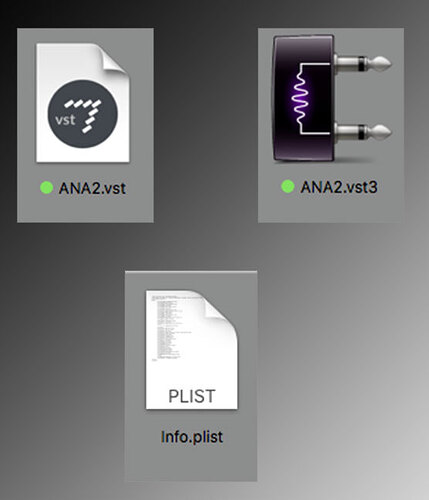 If you need to, go through a complete manual uninstall procedure as follow :

!! Please make sure to back up your User Presets before going through a manual uninstall of ANA 2​ !!

Thanks for the steps to troubleshoot. Unfortunately, I’m still seeing the same thing.

Both VST2 and VST3 files had “CFBundleShortVersionString” as “2.0.993”. I did the full manual uninstall, rebooted, re-installed v2.0.993b, and then restarted Studio One. I also double-checked that there weren’t any other VST paths set in Studio One and reset the block list / set to rescan on startup.

When I open one of my old songs I still get the same error. I did notice that I get a beachball for a few seconds when the song is loading on “ANA 2”, but then the load continues. I checked Console but didn’t see any errors or warnings or anything else of interest searching for “ana2” or quickly scanning entries for “studioapp”.

The space I was referring to is what I see in Studio One as the “Device name”. The track has “ANA2” for the existing tracks, and if I drag a new VST3 to create a new track it has “ANA 2”.

Would you know with which version of ANA 2 those older projects were made ?

It could be an issue with using an older version of the plugin that was not implementing this feature yet.

Could you please try the following :

If that work, then you could try to remove the VST 3 once again, load your older projects and save them again with VST2 v2.0.993, then move back the VST 3 again and give it a try.

The goal here is first to be sure that the VST3 replace VST2 when available feature is working for you with 2.0.993

That did the trick. The streamlined steps that worked:

Unfortunately, I don’t have the old version number handy. I’d need to dig that out from a Time Machine backup. Let me know if that info would be useful, and I can try to get it from one of those.

Thanks again for the help!